Welcome to the 16th part of our Machine Learning with Python tutorial series, where we're currently covering classification with the K Nearest Neighbors algorithm. In the previous tutorial, we covered Euclidean Distance, and now we're going to be setting up our own simple example in pure Python code.

To start, let's make the following imports and set a style for matplotlib:

We're going to use warnings to avoid using a lower K value than we have groups, math for the square root functionality, at least initially (since I will show a more efficient method), and then Counter from collections to get the most popular votes.

Next, we create some data:

The dataset is just a Python dictionary with the keys being the color of the points (think of these as the class), and then the datapoints that are attributed with this class. If you recall our breast cancer dataset, the classes were numbers, and often times will be numbers to work with scikit-learn. For example, "benign" was translated to being given an arbitrary number of "2" and malignant was given the number of "4" in the dataset, rather than a string. This is mainly because Scikit-Learn simply required use to use numbers, but you do not inherently actually need to use numbers for your classes with a K Nearest Neighbors classifier. Next, we just specify a simple data set, 5,7 to be data we want to test. We can create a quick graph by doing: 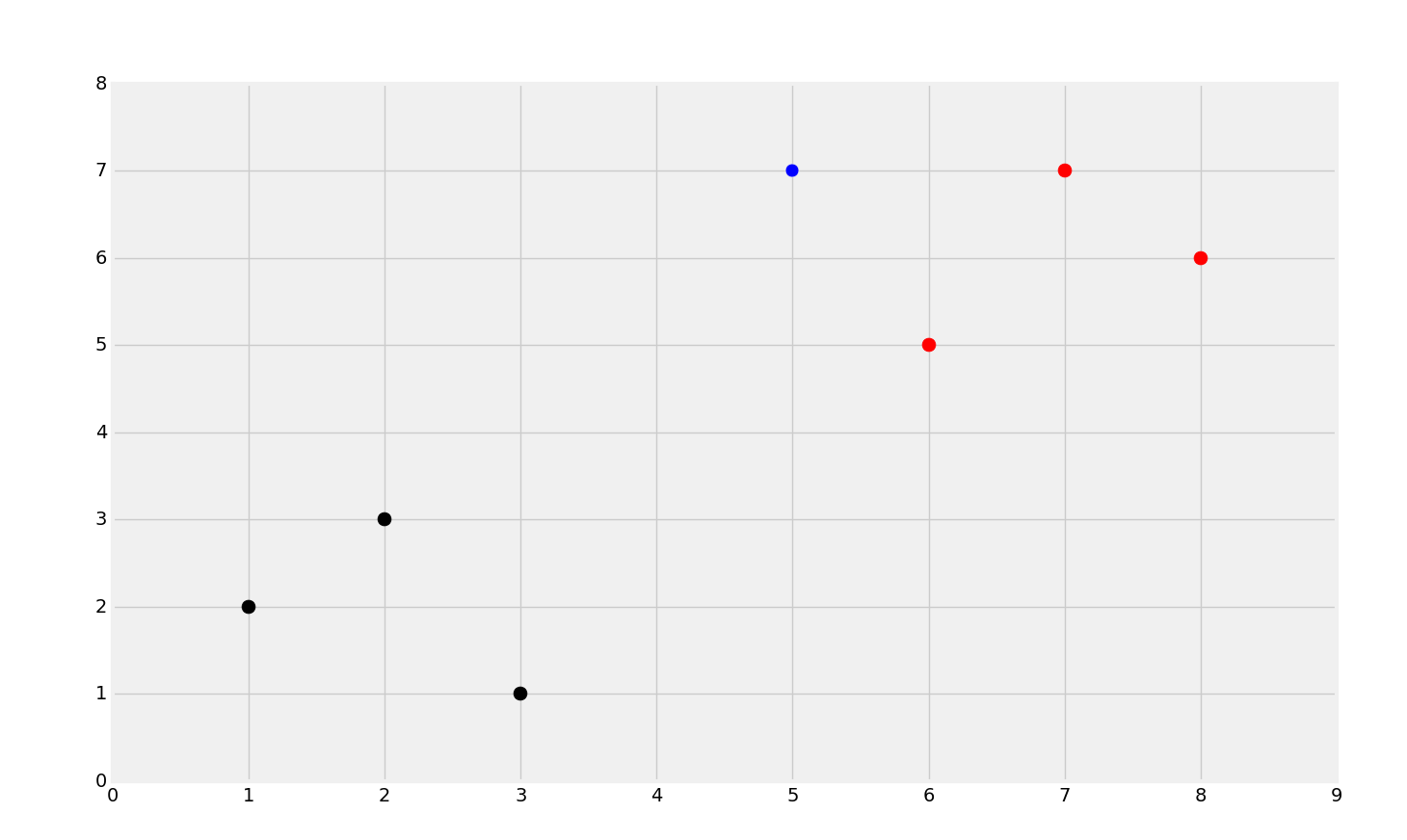 You can see there are obvious groups of red and black, and then we have the blue dot. The blue dot is the new_features, which we're going to attempt to classify.

We have our data, now we want to create some sort of function that will actually classify the data:

There's a skeleton of what we expect to have here to start. We want a function that will take in data to train against, new data to predict with, and a value for K, which we'll just set as defaulting to 3.

Next, we'll begin populating the function, first with a simple warning:

We have this warning to warn the user if they attempt to use the K Nearest Neighbors function to vote where the nearest neighbors selected is less than or equal to the number of groups that can vote (since allowing for this could still give us a tie).

Now, how do we find the closest three points? Is there some magical formula that finds these? Unforunately not. If there ever was one, that would be massive. Why? The main downfall of K Nearest Neighbors is that we have to compare the data in question to all of the points from the dataset before we can know what the closest three points are. As such, K Nearest Neighbors performs slower and slower the more data you have. We'll get there in the end, but consider if there is a way to speed up the process as we go.