The Support Vector Machine, created by Vladimir Vapnik in the 60s, but pretty much overlooked until the 90s is still one of most popular machine learning classifiers.

The objective of the Support Vector Machine is to find the best splitting boundary between data. In two dimensional space, you can think of this like the best fit line that divides your dataset. With a Support Vector Machine, we're dealing in vector space, thus the separating line is actually a separating hyperplane. The best separating hyperplane is defined as the hyperplane that contains the "widest" margin between support vectors. The hyperplane may also be referred to as a decision boundary. The easiest way to convey this is through images: 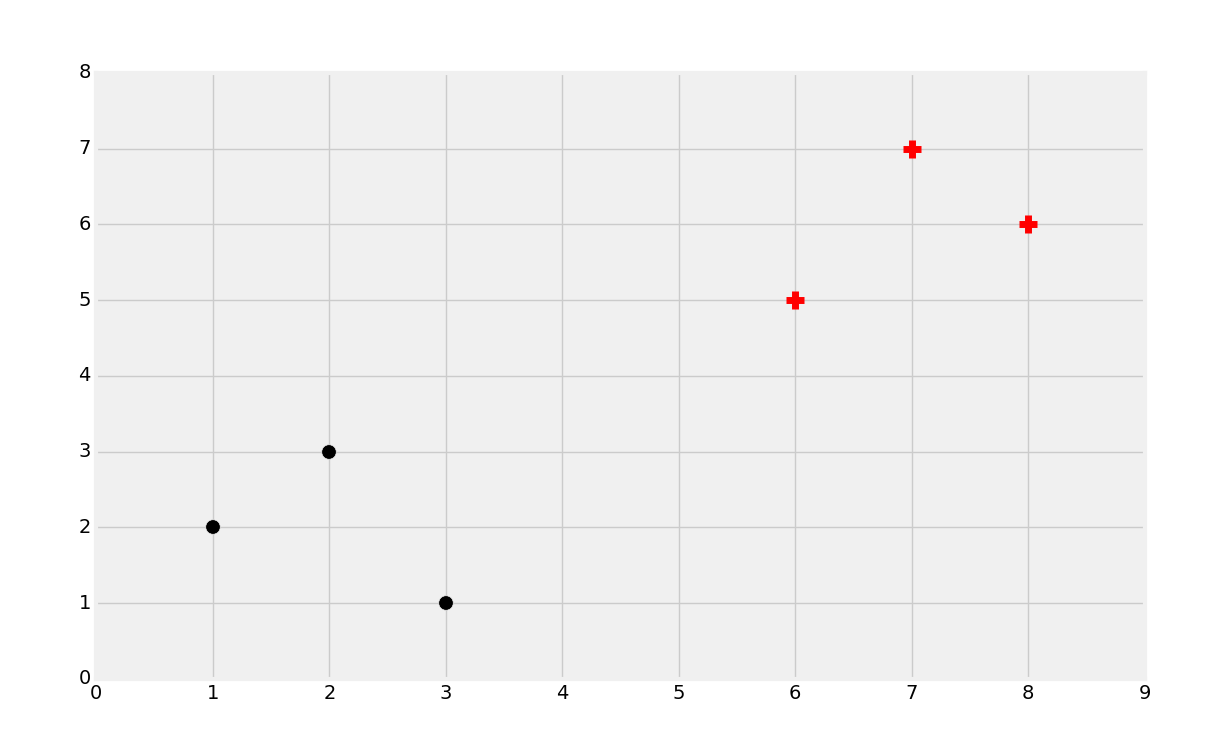 We will start with the above data. We noted in the past that the most common intuition is that you would classify a new data point based on what it is closest to or the proximity, which is what the K Nearest Neighbors algorithm does for us. The main issue with this objective is that, per datapoint, you have to compare it to every single datapoint to get the distances, thus the algorithm just doesn't scale well, despite being fairly reliable accuracy-wise. What the Support Vector Machine aims to do is, one time, generate the "best fit" line (but actually a plane, and even more specifically a hyperplane!) that best divides the data. Once this hyperplane is discovered, we refer to it as a decision boundary. We do this, because, this is the boundary between being one class or another. Once we calculate this decision boundary, we never need to do it again, unless of course we are re-training the dataset. Thus, this algorithm is going to scale, unlike the KNN classifier.

The curiosity is, of course, how do we actually figure out that best dividing hyperplane? Well, we can eye-ball this. 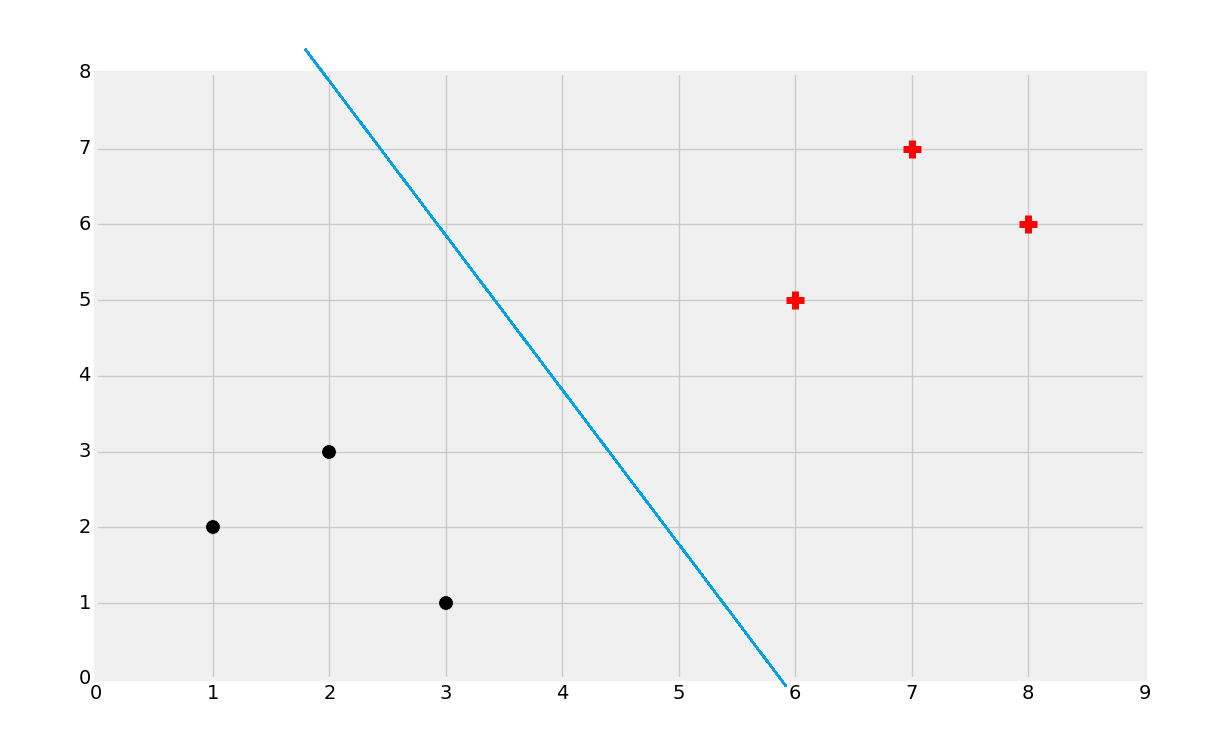 That's probably about right, but, how do we find that? Well, first you find the support vectors: 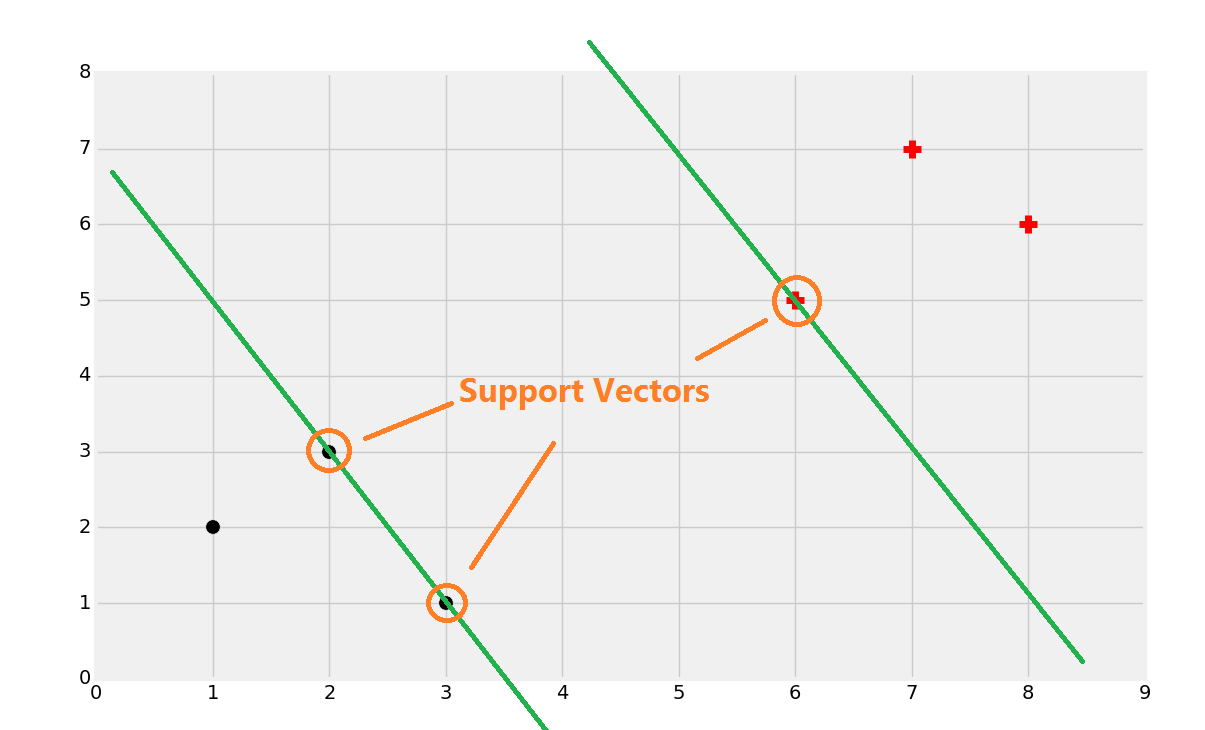 Once you find the support vectors, you want to create lines that are maximally separated between each other. From here, we can easily find the decision boundary by taking the total width: 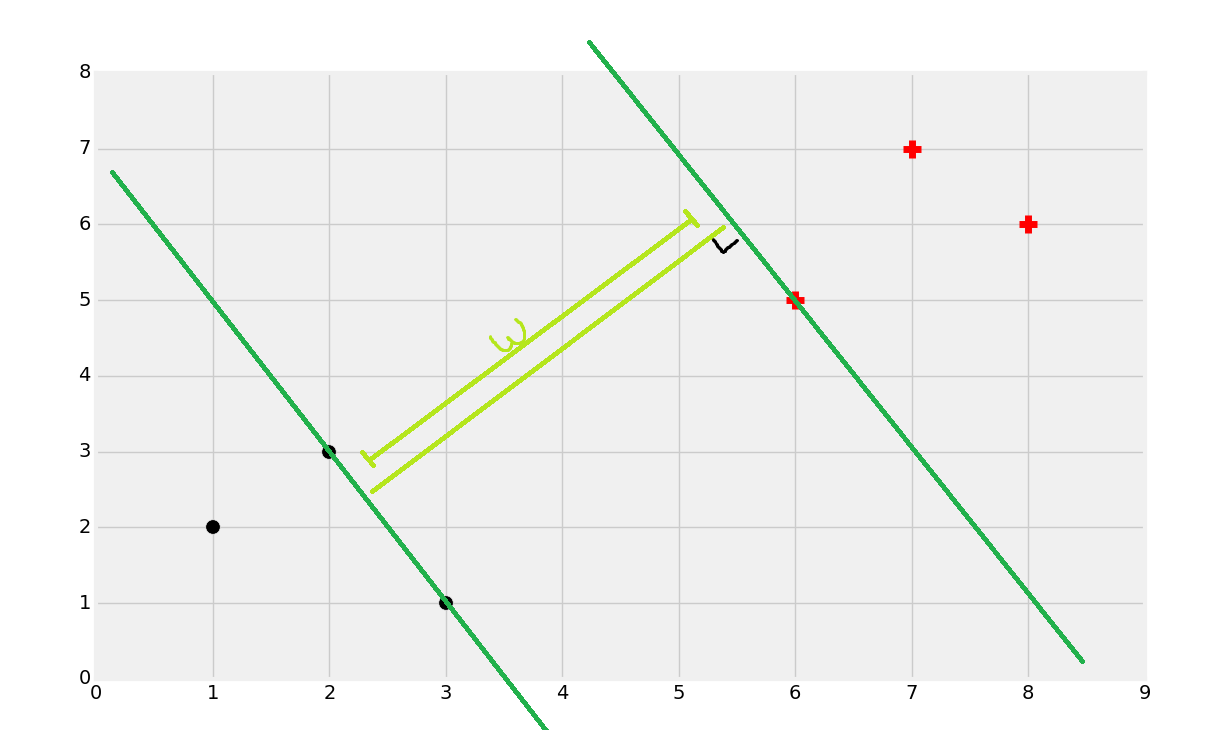 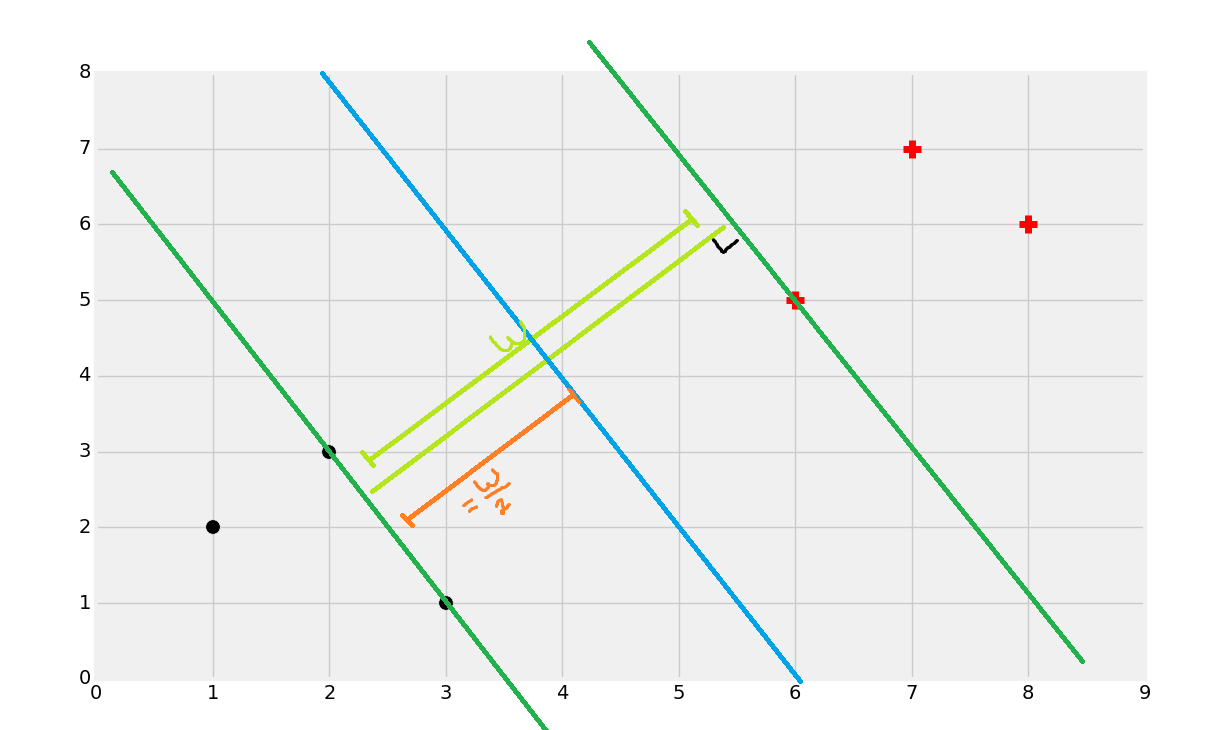 And you've got your boundary: 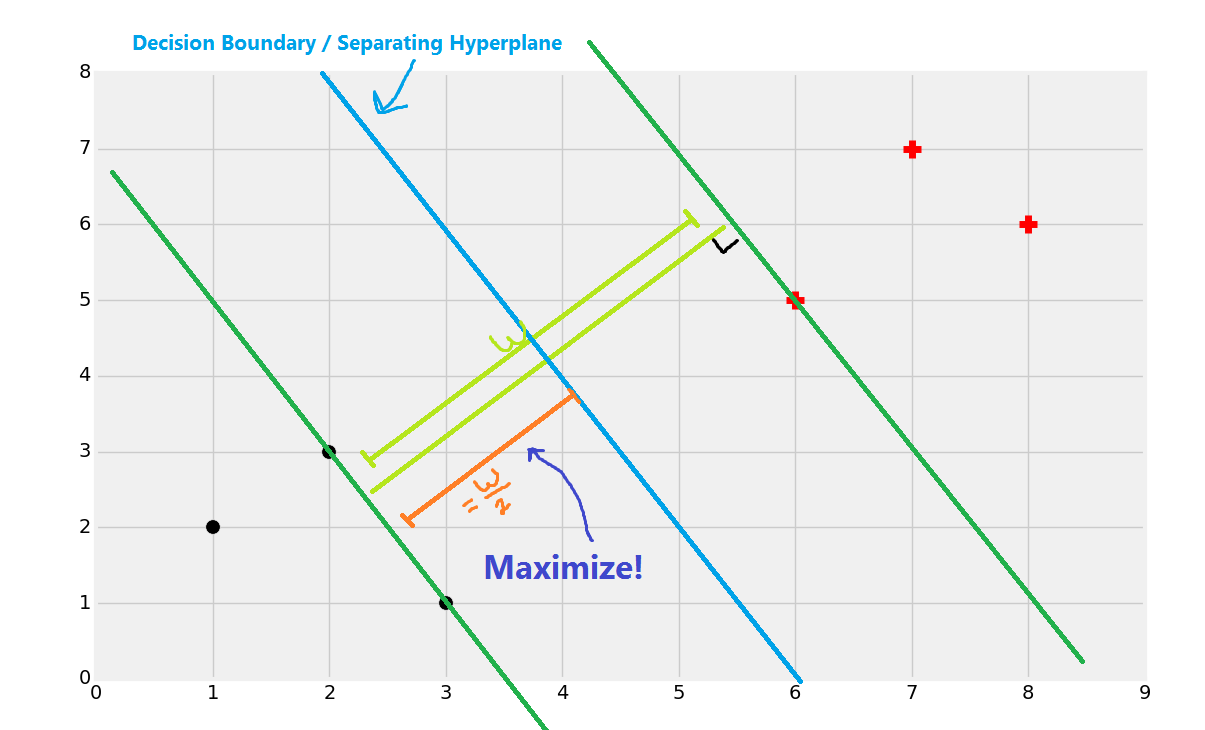 Now if a point is to the left of the decision boundary/separating hyperplane, then we say it's a black dot class. If it is to the right, then it is a red plus sign class.

It is worth noting, of course, that this method of learning is only going to work natively on linearly-separable data. If you have data like: 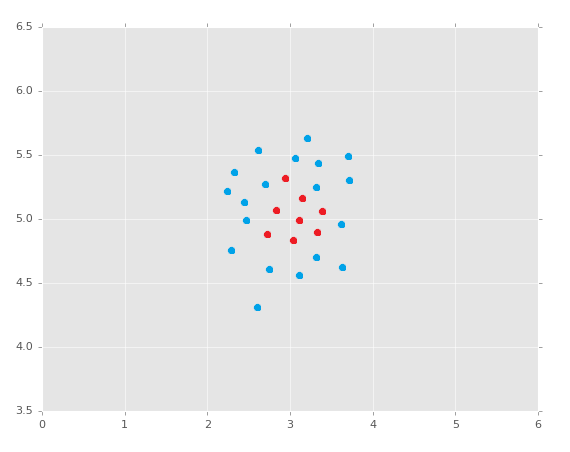 Can you create a separating hyperplane here? No. Is all hope lost? I'll let you ponder that question as we dive into an example with the Support Vector Machine. Here's a really great reason why working with Scikit-Learn is lovely. Remember the code we used with Sklearn to do K Nearest Neighbors? Here it is:

We need to make only two simple changes here. The first is to import svm from sklearn, and the second is just to use the Support Vector Classifier, which is just svm.SVC. With our changes now:

For me, my output was:

Depending on your random sample, you should get something between 94 and 99%, averaging around 97% again. Also, timing the operation, recall that I got 0.044 seconds to execute the KNN code via Scikit-Learn. With the svm.SVC, execution time was a mere 0.00951, which is 4.6x faster on even this very small dataset.

So we can agree that the Support Vector Machine appears to get the same accuracy in this case, only at a much faster pace. Note that if we comment out the drop id column part, accuracy goes back down into the 60s. The Support Vector Machine, in general, handles pointless data better than the K Nearest Neighbors algorithm, and definitely will handle outliers better, but, in this example, the meaningless data is still very misleading for us. We are using the default parameters, however. Looking at the Documentation for the Support Vector Classification, there sure are quite a few parameters here that we have no idea what they're doing. In the coming tutorials, we're going to hop in the deep end to pull apart the Support Vector Machine algorithm so we can actually understand what all these parameters mean and how they affect things. While we're breaking things down, start thinking about: How to handle non-linearly seperable data and datasets with more than two classes (since and SVM is a binary classifier, in the sense that it draws a line to divide two groups).