Welcome to the 10th part of our of our machine learning regression tutorial within our Machine Learning with Python tutorial series. We've just recently finished creating a working linear regression model, and now we're curious what is next. Right now, we can easily look at the data, and decide how "accurate" the regression line is to some degree. What happens, however, when your linear regression model is applied within 20 hierarchical layers in a neural network? Not only this, but your model works in steps, or windows, of say 100 data points at a time, within a dataset of 5 million datapoints. You're going to need some sort of automated way of discovering how good your best fit line actually is.

Recall earlier when we showed various plots, you could already begin to see how likely a best-fit line would be a good overall fit or not, such as in the case of: 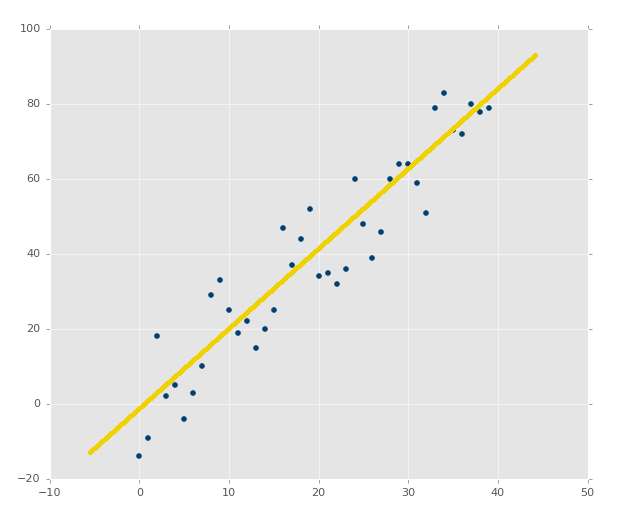 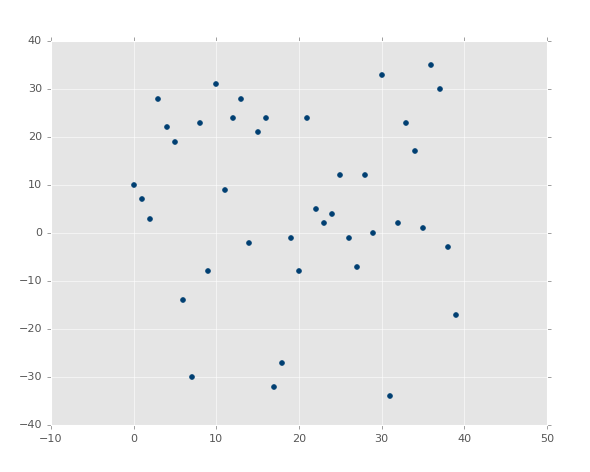 In the second image, there is a best fit line, but who cares. Even the best fitting line is still going to be useless, and we'd like to know that before we spend precious computational power on it.

The standard way to check for errors is by using squared errors. You will hear this method either called r squared or the coefficient of determination. So what is squared error? 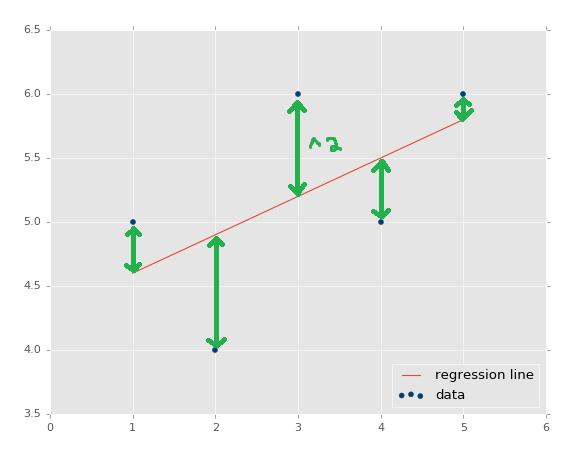 The distance between the regression line's y values, and the data's y values is the error, then we square that. The line's squared error is either a mean or a sum of this, we'll simply sum it.

We actually have already been working with a squared error assumption. Our best-fit line equation is the result of a proof that is used to discover the calculation for the best-fit regression line, where the regression line is the line that has the least squared error. You can search for "regression proof" or "best fit line proof" to get an understanding of the proof. It's fairly easy to follow, and is actually mostly just algebraic rearranging to come to the conclusion.

Why are we squaring errors? Why not just adding them up? First, we want a way to normalize the error as a distance, so the error might be -5, but, when squared, that's a positive number. Another reason is to further punish for outliers. The "further" off something is, the more the it affects the error. This is simply the standard people use. You could use the power of 4, 6, 8, or whatever. You could also just use the absolute value of the errors. If you have a unique challenge, maybe where some extreme outliers do exist, but you don't care to map them, you could consider doing something like an absolute value. If you care a lot about outliers, you could use much higher exponents. We'll stick with squared, as that is the standard almost everyone uses.

Alright, so we calculate squared error of the regression line, now what? What's that mean? Squared error is totally relative to the dataset, so we need something more. That's where "r squared" comes in, also called the "coefficient of determination." The equation for this is

So, the coefficient of determination is the above equation, what do you think is good or bad? We see it's a 1 minus something. Typically, in math, when you see this, the objective is to return a percentage, some number between 0 and 1. What do you think would be a good r-squared/coefficient of determination? Let's say the answer to r-squared here is 0.8. Is that good or bad? Is it better or worse than 0.3? For r-squared to be 0.8, that means the division of the squared error of the regression line and the squared error of the mean of the ys was 0.2. Something like 2/10. That means the error of the regression line was far less than the error of the mean of the ys. Sounds like a good thing to me. Thus, 0.8 is pretty good.