In the previous Machine Learning with Python tutorial we finished up making a forecast of stock prices using regression, and then visualizing the forecast with Matplotlib. In this tutorial, we'll talk about some next steps.

I remember the first time that I was trying to learn about machine learning, and most examples were only covering up to the training and testing part, totally skipping the prediction part. Of the tutorials that did the training, testing, and predicting part, I did not find a single one that explained saving the algorithm. With examples, data is generally pretty small overall, so the training, testing, and prediction process is relatively fast. In the real world, however, data is likely to be larger, and take much longer for processing. Since no one really talked about this important stage, I wanted to definitely include some information on processing time and saving your algorithm.

While our machine learning classifier takes a few seconds to train, there may be cases where it takes hours or even days to train a classifier. Imagine needing to do that every day you wanted to forecast prices, or whatever. This is not necessary, as we can just save the classifier using the Pickle module. First make sure you've imported it:

With pickle, you can save any Python object, like our classifier. After defining, training, and testing your classifier, add:

Now, run the script again, and boom, you should have linearregression.pickle which is the serialized data for the classifier. Now, all you need to do to use the classifier is load in the pickle, save it to clf, and use just like normal. For example: 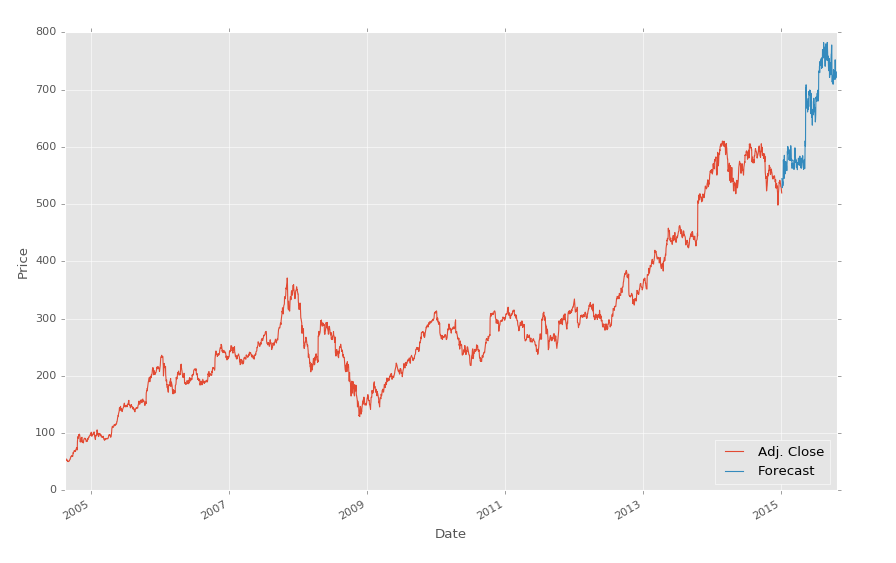 Notice that we have commented out the original definition of the classifier and are instead loading in the one we saved. It's as simple as that!

Finally, while we're on the topic of being efficient and saving time, I want to bring up a relatively new paradigm in the last few years, and that is temporary super computers! Seriously. With the rise of on-demand hosting services, such as Amazon Webservices (AWS), Digital Ocean, and Linode, you are able to buy hosting by the hour. Virtual servers can be set up in about 60 seconds, the required modules used in this tutorial can all be installed in about 15 minutes or so at a fairly leisurely pace. You could write a shell script or something to speed it up too. Consider that you need a lot of processing, and you don't already have a top-of-the-line-computer, or you're working on a laptop. No problem, just spin up a server!

The last note I will make on this method is that, with any of the hosts, generally you can spin up a very small server, load what you need, then scale UP that server. I tend to just start with the smallest server, then, when I am ready, I resize the server, and go to town. When done, just don't forget to destroy or downsize the server when done.