Tokenizing Words and Sentences with NLTK

The NLTK module is a massive tool kit, aimed at helping you with the entire Natural Language Processing (NLP) methodology. NLTK will aid you with everything from splitting sentences from paragraphs, splitting up words, recognizing the part of speech of those words, highlighting the main subjects, and then even with helping your machine to understand what the text is all about. In this series, we're going to tackle the field of opinion mining, or sentiment analysis.

In our path to learning how to do sentiment analysis with NLTK, we're going to learn the following:

In order to get started, you are going to need the NLTK module, as well as Python.

If you do not have Python yet, go to Python.org and download the latest version of Python if you are on Windows. If you are on Mac or Linux, you should be able to run an apt-get install python3

Next, you're going to need NLTK 3. The easiest method to installing the NLTK module is going to be with pip.

For all users, that is done by opening up cmd.exe, bash, or whatever shell you use and typing:
pip install nltk

Next, we need to install some of the components for NLTK. Open python via whatever means you normally do, and type:

Unless you are operating headless, a GUI will pop up like this, only probably with red instead of green: 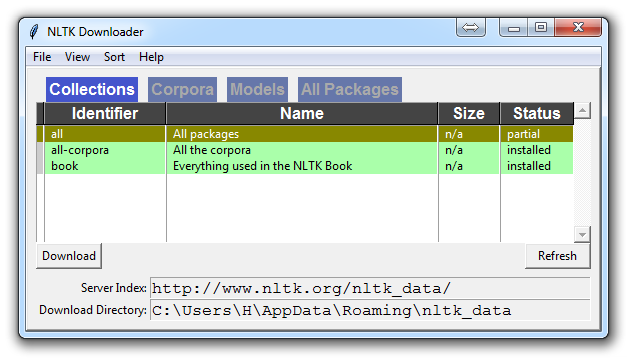 Choose to download "all" for all packages, and then click 'download.' This will give you all of the tokenizers, chunkers, other algorithms, and all of the corpora. If space is an issue, you can elect to selectively download everything manually. The NLTK module will take up about 7MB, and the entire nltk_data directory will take up about 1.8GB, which includes your chunkers, parsers, and the corpora.

If you are operating headless, like on a VPS, you can install everything by running Python and doing:

Now that you have all the things that you need, let's knock out some quick vocabulary:

These are the words you will most commonly hear upon entering the Natural Language Processing (NLP) space, but there are many more that we will be covering in time. With that, let's show an example of how one might actually tokenize something into tokens with the NLTK module.

At first, you may think tokenizing by things like words or sentences is a rather trivial enterprise. For many sentences it can be. The first step would be likely doing a simple .split('. '), or splitting by period followed by a space. Then maybe you would bring in some regular expressions to split by period, space, and then a capital letter. The problem is that things like Mr. Smith would cause you trouble, and many other things. Splitting by word is also a challenge, especially when considering things like concatenations like we and are to we're. NLTK is going to go ahead and just save you a ton of time with this seemingly simple, yet very complex, operation.

The above code will output the sentences, split up into a list of sentences, which you can do things like iterate through with a for loop.
['Hello Mr. Smith, how are you doing today?', 'The weather is great, and Python is awesome.', 'The sky is pinkish-blue.', "You shouldn't eat cardboard."]

So there, we have created tokens, which are sentences. Let's tokenize by word instead this time:

There are a few things to note here. First, notice that punctuation is treated as a separate token. Also, notice the separation of the word "shouldn't" into "should" and "n't." Finally, notice that "pinkish-blue" is indeed treated like the "one word" it was meant to be turned into. Pretty cool!

Now, looking at these tokenized words, we have to begin thinking about what our next step might be. We start to ponder about how might we derive meaning by looking at these words. We can clearly think of ways to put value to many words, but we also see a few words that are basically worthless. These are a form of "stop words," which we can also handle for. That is what we're going to be talking about in the next tutorial.


There exists 4 quiz/question(s) for this tutorial. for access to these, video downloads, and no ads.