Quantopian Fetcher - Python for Finance with Zipline and Quantopian 9


While you may sometimes be able to create an algorithm that deals purely with basic data like prices, more advanced algorithms tend to also draw from information that may come from another source than the market. For example, in this tutorial, we're going to use stock sentiment analysis data from Sentdex.com, which is a website that tracks sentiment analysis on stocks, politics, and more. An example of the visual representation of stock price to sentiment is: 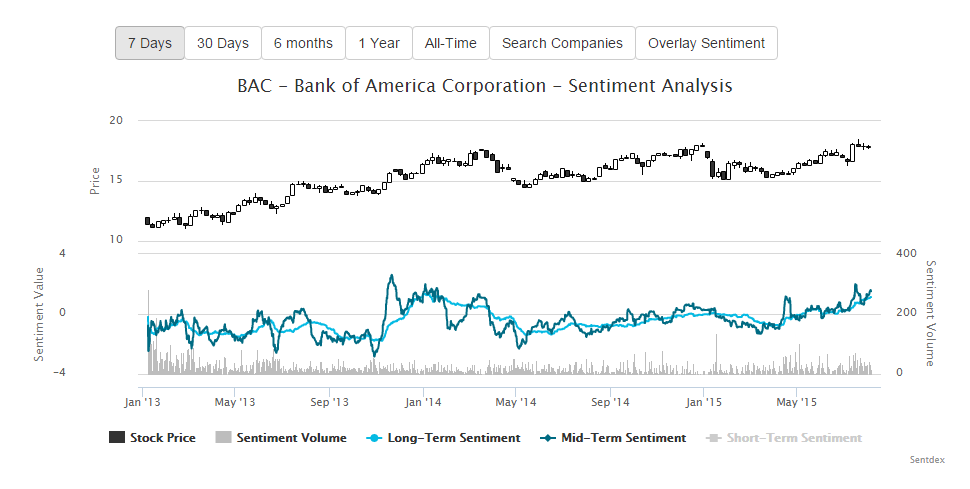 Visually looking at the graph, we can see some places where it looks like we could make some great trades, others maybe we're not sure. Bottom line, we need to test it, rather than rely on our likely biases. Since I wrote Sentdex, I probably have a lot of bias!

Since we've been using the Quantopian service up til now, which combines Python and Zipline into a nice web-based app, we'd like to continue using them. The only problem is Quantopian doesn't currently incorporate Sentdex data! Luckily, Quantopian has thought about this, and they have built in a method called fetch_csv. This method allows us to call upon a CSV-like file that is hosted online to collect the data.

If we head to the Sentdex API, we can find a sample of the entire database, as well as a sample of a couple years of sentiment signal data that we can directly incorporate into our algorithm. This sample dump is updated once in a while, since it is free and there's a paid API if you want constant updates.

There are a few ways to consume the sentiment signals, but the free sample comes with daily sentiment signal means, updated 30 minutes prior to market open for each day. This sample file is the entirety of data available from Sentdex, which started in October 2012.

Example output from the sample:

If the company was not updated at all that day, then there is no report in the sample. If it was, then the reported sentiment signal is a 24 hour mean of updates, which again is calculated 30 minutes before the markets open.

What the signals mean:

With this data, we're curious what we can see by investing solely on sentiment data. To start, we write our initialize method:

First, context.investment_size dictates the size of the investment in any company that we want to make. Basically, we're interested in having 10 positions at any time. Next, we save a stop-loss percent, if we want to add stop loss. Next, we'll use a new method called set_symbol_lookup_date, which is used to set what date we're using for the symbols. Symbols change over time, companies come and go, so we'll set this to the starting time of Sentdex's data. Finally, we use fetch_csv to grab the Sentdex API sentiment signals sample. One of the parameters here is called pre_func. There's a pre function and a post function, which you can run on the data. For now, we can just run a pre_func that will be just a preview of the data, something like:

Full code up to now is:

Once this is done, you should run the code to make sure the dataframe's head is output to the log. Not familiar with DataFrames? Check out the Pandas tutorials! Otherwise, continue along to the next tutorial.