In this tutorial, we'll wrap up the building of a basic quadcopter, fly it, and talk about a few more important things. First, we need to talk about propellers.

There are two major types of propellelers. Some are threaded, some arent. If your motor's shaft isn't threaded, then you cannot use the threaded propellers.

Threaded propellers are usually both the propeller and attachment system all in one. This is nice for quickly attaching and detatching the propellers, but it does not allow for you to balance the propeller. Almost no propellers come perfectly balanced, so you can safely assume the quick detatch ones are not perfect either. Despite this, I have had no issues personally with adjusting for differences in balance by modifying trim on the controller. If you can, then you can balance a propeller by adding tiny bits of tape to the underside of the propeller to add weight, and you use a propeller balancer.

In the image below, the quick-detach/attach propeller is to the left, the typical non-threaded to the right, along with the adapter/cap/whatever you want to call it (the cap should come with the motor, not the propeller if the motor shaft is threaded) 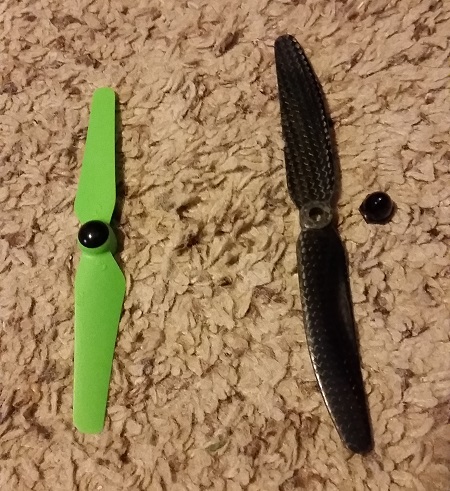 If the shaft is not threaded, then you're looking for a propeller adapter, which simultaneously clamps the propeller in place vertically on the shaft as well as clamping to the motor shaft itself.

By whatever means you're supposed to, attach the propellers. Take note the required spin direction. You should be able to visually look at the propeller and know which way it needs to spin to apply down-force.

Before taking off, make sure your quadcopter flight control board, if it has multiple options like the one I am using in the videos does, is set for x-copter flight. I had already set mine to this, but, for some reason, it wound up going back to the default. Because of that, this happened:

Despite the whole crash thing, I found it incredible that the quadcopter could flip over in place like that. I was only up about 2 feet or so in that gif.

After fixing for that, we had much more stable flight:

At this point, you should be all set. If you're having issues, please feel free to comment your problems on the respective videos and I will do my best to help you out. Next, on to a bit less of an exciting topic: Legal stuff.

Okay, so before you go flying your quadcopter off into the sunset, there are a few things that you need to think about before you go out the door. You need to consider the rules and laws in your area. For example, in the United States, if you fly your "drone" outside, including even in your own backyard, you must register your drone with the FAA. Beyond that, you should be aware of what you have here. To you, this might be just a fun toy or hobby, but, in the eyes of the law, what you have is or could be: A drone, a surveillance device, an aircraft, or even a deadly weapon.

To give you an annecdotal example of how laws can affect you: I live in Texas. Here in Texas, there is no such thing as "public land." Many states do have public lands and you can do all sorts of fun things there, but not here. Another, separate, law here in Texas is that you cannot record a private individual on private property and distribute that media, unless you got permission. Not too long ago, Texas got a lot of flooding, and people were posting their drone videos on YouTube. All of this footage was illegal. It's unlikely anyone was actually charged, but you are opening the door to that possibility when you record with a drone in Texas, or maybe your very own state.

Next, due to the fact that all land is private here, I cannot go to a park, or really anywhere, to fly the drone without some permission from someone, or even fly on my own land (given I have registered with the FAA to be in compliance with Federal law). All of the parks around me are owned by the government, and managed by the US Army Corps of Engineers. I was flying around in a flood basin, and told I couldn't fly there, because aircraft were not allowed there, as per the rulebook I was handed. I really do not think the drone is, by legal definition, an aircraft, it's a drone, but guess what? It does not matter what you think, the land is not public. The owners can come by and tell you they don't like your shoes, so you need to leave. If you don't leave, that's trespassing. This may all sound kind of over-the-top, but that is the law. Just be aware of the situation in your area, and mainly, be safe. The most important thing is that you're not putting other people or yourself in danger.

If you do happen to live in a restrictive state like Texas, don't worry! First, check out the AMA (Academy of Model Aeronautics). There are many AMA clubs all over the place, and they have land that you can fly on. For more annecdotal information, in my area, there's an AMA club about 10-15 minutes from my residence that has a massive plot of land, a 500 foot by 50 foot concrete runway, and a bunch of extra space for you to fly around. It's a great place to fly. Beyond that, it is leased from the US Army Corps of Engineers for $1750 a year. That's really quite cheap. If you and your friends cannot find a group near you, look into leasing some land. If you can start a club, making that lease expense is actually relatively easy, and worth it in my opinion.

Alright, so that's it! Go have some fun!