I will still outline some basics, but I highly encourage you to dive into the theory and conceptual side of quantum physics on your own because I really am not the best person to educate there. I am going to focus mainly on the programming and application side of things here.

That said, some basic foundation is required, so:

What are quantum computers?

Quantum computers are machines that work with qubits (quantum bits) rather than regular bits.

A regular bit is a transistor that registers either a high or low voltage, which corresponds to 1 or 0 respectively. Through advances in technology over the years, we have bits that are nearly the size of atoms, which is absolutely incredible.

A quantum bit is a 2-state quantum "device." Many things can be used as qubits, such as a photon's horizontal and vertical polarization, or the spin up or spin down of an electron. What this means for us as computer scientists is that a qubit can be a 0, 1, or both.

You're going to be thinking that a lot, but these are the properties that make quantum computers very compelling to use for certain problems. Both superposition and entanglement seem like magic to me, but both are proven qualities of qubits.

What problems are quantum computers for?

Problems like logistics, such as the most ideal delivery route for trucks, or even concepts like planning for companies, where each choice branches out into new possible choices and opportunities.

This might still seem vague. Let's consider you're planning a charity dinner and you're attempting to seat people together who will keep eachother in good, donating, moods.

Let's pretend for now you just have 1 table with 5 seats. How many combinations do we have here? Well, it's 5x4x3x2x1, or 5 factorial, which is 120. This means there are 120 possible combinations.

Modeling is probably the most near-term real-world example that I see quantum computers being useful.

Classical computers can barely simulate many single molecules...and they do a very poor job of it (due to the issue of how many possibilities there are given a situation). You currently cant rely on a classical computer to do chemistry simulations reliably.

A quantum computer can actually model many molecules already today reliably, and it only gets better from here seemingly.

How do quantum computers consider, fundamentally, more possibilities at once?

Being exponential like this gives us some phenomenal properties. This is why quantum computers can help us with heavy-optimization types of tasks, or just tasks that have many possibilities.

I think the simplest explanation of a quantum computer that I can come up with for now is that:

Classical computers can approximate and synthesize probability, they are not truly accurate and can never be with most tasks that use probability, unless of course you really can fit the entire range of possibilities into memory. Then you can get pretty close. But again, the probability space tends to explode as you add more variables.

Sold! I want a quantum computer

You can't really buy a quantum computer yet, unless you build one yourself. As much as I can guess, a quantum computer would likely be somewhere between ten million dollars and one hundred million dollars, if not more, and require specialized personel and equipment to keep running. It appears that DWAVE has actually sold at least one $15 million USD quantum computer. I have to admit though, I am a bit confused on exactly what D-Wave's computers are as compared to what IBM and Google are working on. D-Wave's machines have seemingly been able to have x50 more qubits than everyone else. I see they use some different methods, and no one has seemingly been able to prove their machines are inferior yet. This will be interesting to see play out.

But we *can* access quantum computers in the cloud!

So these companies who have no doubt spent hundreds of millions of dollars on these quantum computers...what do they do with them?

It turns out, opening them up to the public, for free, is not uncommon.

Google, Microsoft, IBM, D-Wave, and I am sure many others all offer some form of cloud-based quantum computer access.

I checked into all of the providers that I knew about, and, surprisingly, found IBM's to be the easiest to get up and running with. You really can go from nothing to running on an actual quantum computer in a few minutes.

... but we're currently at a stage with Quantum computers where the technology exists but no one really knows what all we can do here, or what will come of it.

So, let's take advantage of this absurd time and play with the bleeding edge of technology!

IBM has also done what I would call a phenomenal job with making both the tools as well as education available for free to anyone who is interested in diving in. I hope to continue this trend for them.

I am assuming you already have python installed and are beyond the python basics. If not, please start with the basics here: Python 3 programming basics tutorial.

I personally found that I had to force install qiskit-ibmq-provider:

Quantum computers essentially are different to their core, the "bit." Thus, as painful as it may be, we will be starting at the bit-level, the qubit.

We quite literally will be building out the "circuits" for our bits, creating various types of gates.

The following circuit appears to me to be the "hello_world" quantum circuit of choice for everyone, so I'll stick with it.

Alright, we've built our quantum circuit. Time to run the circuit. This is a quantum computing tutorial, so let's go ahead and just get running something on a Quantum Computer out of the way so we can add this to our resume. 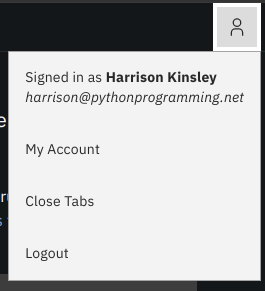 From there, you can click "copy token" which will copy your token to clipboard, which we will use in a moment: 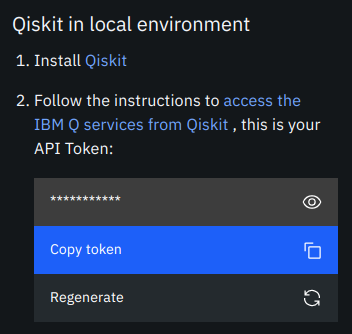 Once you've got your token, you're ready to try to connect to a quantum computer and run there.

Now you can connect with your token by doing:

I am going to store my token to a file so I dont accidentally share it, but you can just paste it right in here as a string. For me, however, I will do:

This saves on your actual machine, so you only need to do this once ever (unless your token changes), which is why I am getting the "Credentials already present" message. From then on, you can just do:

So mostly we got 11 at the end of our test (each number corresponds to a bit value here), which was expected. Our default qubit value is 0, then we used a not game (.x), which then made it a one. Then we applied an exclusive or, which would flip the 2nd (target qubit), if the first (the control qubit), was a 1. It was, so this is why our intended answer was indeed a 11. As you can see, however, we got some 01, 10, and some 00. What's this?

Expect noise, and rely on probability.

This is why we perform many "shots." Depending on the probability distribution possible for your output, you will want to perform a relevant number of "shots" to get the right answer.

Regardless, you did it! Time to update that resume to say "Quantum Programmer!"

Now, let's update this slightly. This is a pretty boring circuit.

This time we're adding circuit.h(0), which adds a Hadamard gate to qubit 0. This puts that qubit into superposition. How might this impact the measured output of 500 shots do you think?

Recall the controlled not gate will flip the target qubit (2nd one) if the control qubit (the first) is 1.

The 2nd qubit was 0 since it was never turned on, and the 1st qubit (qubit 0) was in superposition. Superposition means the qubit is in any of the possible states, but will collapse upon a single state when observed.

This is why we make many observations, so that we can see the actual distribution of outcomes.

This saves us time (not waiting in a queue) along with getting out of the way for other people who have done their R&D locally and are now ready to test on the real thing.

To do R&D locally, it's quite simple. Rather than using an actual backend, we use a simulator. We could also use the simulator backend that IBM hosts.

We'll use the qasm_simulator, since this most closely matches what we did above.

That said, when using simulators, we can use the unitary simulator if we would rather get something more like a matrix output. A statevector simulator will return a statevector. The Qasm sim returns the counts that we've seen so far.

Anyway, now you can try tinkering about in the simulator, then you can test your results for real on an actual quantum computer when you're ready.

I think that's enough for now! More to come in the future.

If you have questions, please come join us in the discord channel, otherwise I will see you in the next tutorial!