Next, we're going to touch on using OpenCV with the Raspberry Pi's camera, giving our robot the gift of sight. There are many steps involved to this process, so there's a lot that is about to be thrown your way. If at any point you're stuck/lost/whatever, feel free to ask questions on the video and I will try to help where possible. There are a lot of moving parts here. If all else fails, I have hosted my Raspberry Pi image: OpenCV and GoPiGo Tutorials Image. It's a 16GB image, and, since reformatting may leave you with too-little space, you may very likely need a larger than 16GB SD card (so, 32GB). Here's a $9 32GB Micro SD card with the adapter. Again, you want to make sure you have a micro-sd with the adapter for two major reasons. Most SD card readers on computers, which you will use to mount the image, are for full-size SD cards, but the Raspberry Pi Model B+ and onward take only a micro SD card, so you need both!

First, we want to get OpenCV. OpenCV stands for Open Computer Vision, and it is an open source computer vision and machine learning library. To start, you will need to get OpenCV on to your Raspberry Pi. I used the following: http://mitchtech.net/raspberry-pi-opencv/

Keep in mind, the "make" part of this tutorial will take 9-10 hours on a Raspberry Pi Model B+. The Raspberry Pi 2 will do it in more like 2-4 hours. Either way, it will take a while. I just did it overnight one night.

In case you are having any trouble getting OpenCV set up on your SD card, I have hosted an image of my SD card with everything up to this point, including OpenCV. It is an image from a 16gb SD card, which means you very well might need a 32gb SD card, since you might not have enough space after formatting.

Once you've done that, you're ready to interact with OpenCV. The following is an example of code I found here

You should be all set, except for the line for the face_cascade variable. We're going to grab a new xml file, which you can find here: Faces XML file

The way image recognition works is we first need to "train" a classifier, like we would with any machine learning algorithm. To do this, we generally need to compile a massive set of images of what we're looking to detect. In the case of faces, we'd want to grab 1,000 images of faces. Then we note where the faces are in the images. Then we feed this information to the machine, saying "hey, here are all the face images, there are the faces. Got it?" From here, you can either be all set, or sometimes you will take another step and show the machine a bunch of images that have no faces at all, and you tell the machine "there are no faces here! See no faces!" At this point, training is done. You're ready to show the machine a new image with a face. Hopefully, given it's "memory" of what images with faces were like, and what the actual faces in the images were like, our algorithm will be able to detect the face.

For a lot of the image recognition tasks, people have already built data sets for you to use for the training part. Face Detection is very popular, so there are already a lot of datasets for face data. License plates? Yep, popular. How about detecting dirty socks on the floor? It's unlikely there's a data set for that. This tutorial is not going to cover the creation of a data set. Keep your eyes peeled for a more in depth OpenCV tutorial series here that will.

Now, change the face_detection line in the script above to link to the Faces XML document I shared above. I put mine in the directory that I've been working in, just make sure you link to wherever you put yours:

Run this script and smile at the camera! The script will either say it found some faces, or not. The resulting image will be output so you can see what it was seeing when it made the assessment. Here's an example from me: 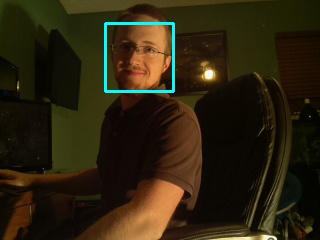 Obviously, the next reasonable step from here would be to attempt to destroy all humans detected by firing missiles at them. Using our code from the foam USB missile launcher tutorial, let's go ahead and glue together OpenCV face detection and missile launches. What's the worst that could happen?

Now, if there's a face detected, missiles will be launched.

That's all for now, for the next tutorial: