Welcome everyone to a tutorial on Terminal, a programming competition by Correlation One. It's a competition, where your goal, as a programmer, is to create an artificial intelligence to compete against other players in the same environment.

You can play in the global competition as well as in the .

Terminal is Tower Defence type of game. You have 6 types of units to deploy according to game rules, but also have limited resources to do so. Game arena is diamond-shaped, where you always ocuppy bottom part of playfield. You are playing against one other bot (bot of the other player) that occupies top part. You can deploy units on your part of arena only.

You are given some additional resources every turn, but game also rewards in other ways, like successful attack). You can find all game rules on the following webpage.

First, you can try to play by hand against couple of bosses. That's an interesting way to get acquainted with game and it's mechanics/rules. Go here, on the left-hand side choose "By hand." On the righ-hand side choose any boss, probably starting with the very first one.

But we are not going to talk about playing by hand, right? We are here to write our bots and take over the universe... ekhm, I mean win.

But before we start, the are couple of requirements we have to met first:

Java might be a bit problematic and requires couple of things to think about. Java 10 already reached end of support, we have to download and install Java 11. Unlike Java 8 and some others, Oracle doesn't allow to download just JRE (Java Runtime Environment) anymore and we have to download JDK (Java Development Kit). JDK is a bit bigger in size, but also unlike JRE, doesn't add own path to system PATH variable during installation. For windows users - check installation dir and copy full path of bin folder (for example C:\Program Files\Java\jdk-[YOUR VERSION]\bin\) and add it to system PATH variable.

If you have Java 8 installed as well (some tools and applications still require it), make sure to add it above/before path of Java 8.

PowerShell has to be configured as well. Open PowerShell with administrator privileges and run:

That should run a game between two starter bots and hopefully prove that you did everything correctly.

Create file called algo_strategy.py next to the newly copied files and folders. Now we are all set to start working on our bot. Open algo_strategy.py in your IDE/Editor of your choice, it's finally time to write some code.

Let's create shell of our bot. We have to import game library and create our own class inheriting from gamelib.AlgoCore, then add the on_game_start() method and save config object passed in by game engine and add on_turn() method. At the end we have to create the object of our class and call it.

First we have to have some knowledge of units we can use, let's get their objects from config.

Next, fill on_turn() method with some code. We have to acquire game state for current turn first. GameState object expects two things from us - game config object and turn state (passed by game engine into on_turn() method). Returned game_state is our center of operations, because almost all of them are being done by invoking it's methods.

Next we want to disable warnings. Warnings are going to be printed for example when we call a method that checks IF we can create some unit and we can't for any reason. I'm not sure why, and why not when we call a method THAT ACTUALLY CREATES unit. At the moment there's also a bug - it prints error even if unit can be successfuly created.

Next we are going to call two our two methods - one that builds defenses and the second one for attacks.

And at the end submit turn.

Full code up to this point.

You should be able to run that code now. Run below command in PowerShell (in context of our Starter Kit folder) and check. Remember that command, as you are going to be using it a lot.

Let's start adding some defenses. We are going to add Filters on both edges of playfield first, then some Destructors to help in early stages of the game, then fill gaps with more Filters leaving small openning in a middle (allowing our ofessive units to pass through). When fully built, it should look like this: 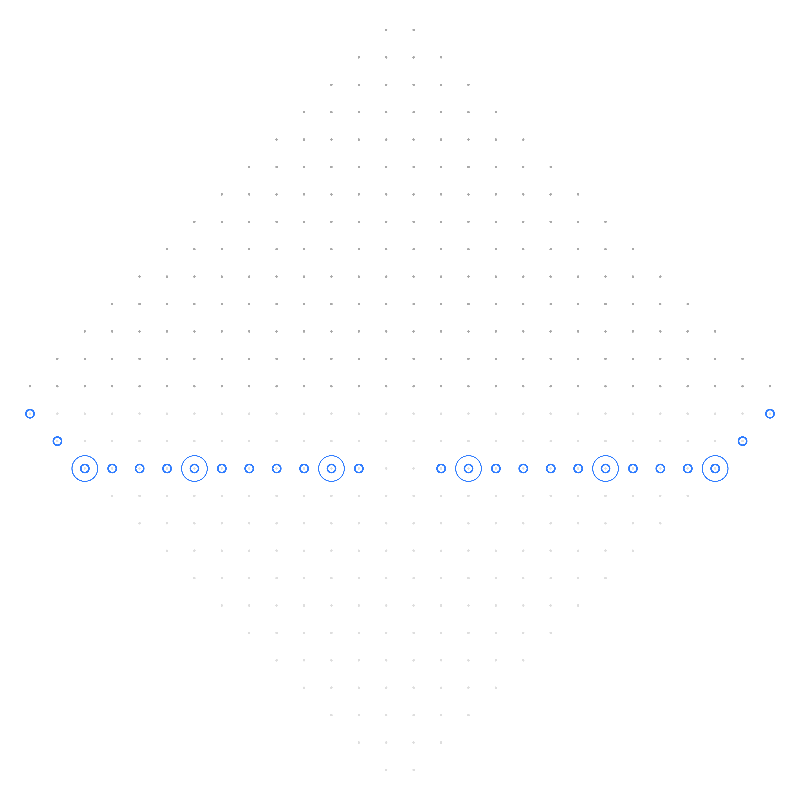 Small circle symbolizes Filter and double circle is a Destructor.

First we have to create a method that helps us create new defensive units. We want to be able to pass a list of locations and unit type to be created. Because a lot of units occupy the same row, let's also allow that list to be just a list of x coordinates accompanied by additonal parameter - row (y) number. We'll need game_state as well. Then our new method should create units for us.

Now we have to iterate over our list of locations.

At that point, as described above, single location can be either a list like [2, 15] (which is ready to use coordinate) or just an int of x coordinate, but then additional parameter named row (y) has to be set as well. In second case lets combine x and row/y into coordinate.

Next we have to check if we can create unit at given location. To do that we can use can_spawn() method that does couple of checks for us, for example if we can afford unit, if location we want to create it on is not occupied, if position is in bounds of the game arena, etc.

If unit can be created, let's create it and log that information. Game library doesn't handle updating available resources when we attempt to spawn a unit. We have to handle for that by ourselves. One method to do that is just by decrease available resource counter by amount we used to create unit. Of course during next round we're going to have updated amount of resources, it's just a case of current round. Why decreasing is important? It's important for can_spawn() which otherwise will always be returning that unit is affordable if we had enough resources at start of a turn. We could create many units and use up all resources, and method won't let us know about that, because it will see still same amount of resources.

If we can't create unit it might mean couple of things, for example we can't afford it. In case of that we want to return and do not try to spawn any new units during this turn (to avoid creating cheaper ones when more expensive are already not affordable, we want to create units in order). There's only one exception - we don't want to break our loop in case of location being occupied. That will allow us to execute the same code every turn and rebuild our defenses. If location is occupied - ignore that and continue.

Last thing we need here is to return True if we didn't encounter any problems, like used up all resources. Full code of the method:

Now, we can finally spawn some defenses. We're going to add code into defense() method. Let's add Filters on both sides (that's an example of situation when we are gloing to pass full coordinates to our newly created above method).

Then let's add some more expensive Destructors and fill gaps with more Filters.

We used list of x coordinates here and passing additional row parameter to our method for greater visibility of our code.

Full code of the method:

What we are trying to achive here is to create units in that exact order, and we are trying to create as many of them as we can afford. That means that this code is going to be ran every turn, adding new units as long as there are still some to build. The other purpose is to rebuild units destroyed by opponent.

Now, we can either run this python scripts/run_match.py tutorial-algo python-algo, or we could zip the tutorial-algo directory, then upload via the my algos button on the nav bar of terminal.c1games.com

Things are working as intended so far. Our next step is to work on attacking.